Do you work in the press or media?

The information on this page is intended for journalists, press and media. Click YES to get to the newsroom. If you click NO you will come back to Mynewsdesk.com.

The future of trucking: Autonomous driving, electrification and digital connectivity are set to make smart logistics and up to 40 percent lower operating costs a reality

Munich, September 2018: Trucking is the leading mode of freight transportation in the world today. Some 70 percent of goods are shipped by road in Europe and the United States, with the figure in China topping 75 percent. And there will be no let-up in demand in the years to come. But transportation and logistics operators as well as the OEMs themselves already have to face up to significant changes as driverless trucks, electric motors, digitalization and an increasing shortage of drivers place the sector under growing pressure. The experts from Roland Berger put the various industry trends under the microscope in their latest study, Shifting up a gear – Automation, electrification and digitalization in the trucking industry (Download study here).

"Even though trucking accounts for the bulk of freight transportation, most companies are still working with very inefficient processes and high costs within their vehicle fleets, which prevents them from fully realizing the potential they could be exploiting," said Stephan Keese, Partner at Roland Berger's Automotive Competence Center. "Plus there are growing driver shortages, particularly for long-haul routes across Europe and the US, and ever-stricter emissions standards to contend with."

Companies seeking to master the challenges will be able to draw on developments in the fields of automated commercial vehicles, electrification and digitalization. The scale of the transformation will see logistics service providers and truck OEMs alike face many difficulties on the road ahead. The fragmented nature of the industry is an additional complicating factor, given that there is a small number of big freight forwarders with extensive fleets of trucks and a long tail of small companies running just a few vehicles. "Because of this situation in the industry, consolidation is inevitable and companies that fail to respond to the changes will find themselves driven out of the market," explained Walter Rentzsch, Roland Berger expert in the United States.

Autonomous driving can cut operating costs by 25 to 40 percent

Driverless trucks are on the increase: Testing is already underway, including in platooning scenarios, where the long-haul sections are driven by automated trucks and the first and last mile handled by conventional vehicles. This development has obvious advantages for the logistics sector in that it could reduce mileage costs by as much as 40 percent.

"We expect fully automated trucks to be on the roads between 2025 and 2030," said Stephan Keese, adding, "But the right infrastructure will need to be put in place at the same time in order to facilitate autonomous driving. That will include clarifying legal questions, such as who is liable in the event of an accident or another incident." 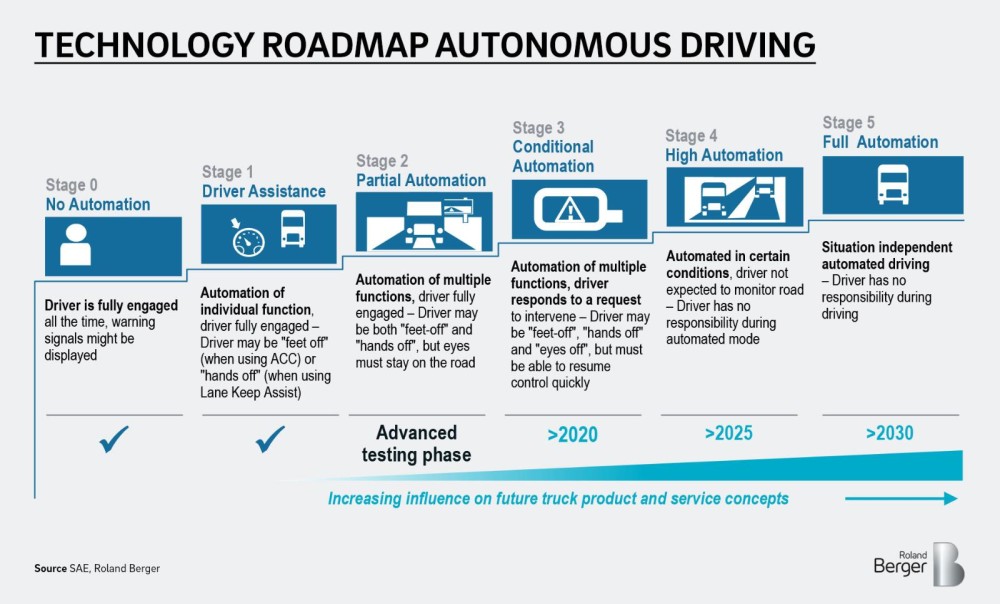 Electric motors are already being offered by established OEMs and new startups alike. That said, the batteries remain the biggest cost factor. Even as the cost of battery cells falls in the future, electric trucks still cannot be operated profitably over long distances in the current setup. "But for trucks driving within a smaller range of up to 400 kilometers, electric-drive options will be an economically viable alternative," explained Walter Rentzsch. Various OEMs have already announced plans to mass-produce trucks of this kind. Emissions standards – resulting in local restrictions on diesel vehicles – and cost benefits are the key factors driving these business decisions.

Digitalization is another key development: In the not-too-distant future, trucks will be fully connected to their environment and will, therefore, be a key element in the more efficient processes that we will see in logistics. Some 20 percent of truck journeys in Europe and the United States take place without a payload today, with as many as 40 percents of Chinese trucks traveling empty. "Process digitalization and artificial intelligence will significantly reduce such inefficiencies – giving the transportation and logistics industry a major competitive advantage," explained Stephan Keese.

That said, this disruption in the sector will also give rise to innovative business models and new rivals with whom to compete. "Logistics firms and commercial vehicle OEMs, therefore, need to define their market strategy and make sure they are taking the right action to address the challenges," said Stephan Keese in summary.

Roland Berger is the only strategy consultancy of European origin with a strong international presence. As an independent firm owned exclusively by our partners, we have 51 offices with a presence in all major markets. Our 2,700 employees are characterized by a unique combination of analytical thinking and an empathetic mindset. Driven by our values of entrepreneurial spirit, excellence, and empathy, we are convinced that business and society need a new, sustainable paradigm that focuses on the whole value-creation cycle. By working in interdisciplinary teams across all relevant sectors and business functions, Roland Berger offers the best expertise worldwide for successfully overcoming the profound challenges of our age now and in the future.