Do you work in the press or media?

The information on this page is intended for journalists, press and media. Click YES to get to the newsroom. If you click NO you will come back to Mynewsdesk.com.

Mobility of the future: China speeds ahead

Munich, October 2018: China is fast becoming the driver of global innovation in the automotive industry. In the race to claim a slice of the future market for mobility services, the Middle Kingdom has taken the lead. One in every two electric cars sold in the first half of 2018 went to a customer in China. The country has also seen a massive expansion of charging infrastructure in the past 12 months and has opened new test roads for autonomous vehicles. Chinese consumers are supportive of technological advances and are making good use of mobility offerings like car sharing and ride hailing (Download study here).

"No other country is as advanced and as open to new technologies and mobility services as China. Most of the traditional automotive nations are stagnating on this front, or are making slow progress at most," said Wolfgang Bernhart, Partner at Roland Berger. "China is not only the world's biggest market for cars and an important manufacturing base – it has, in fact, long since moved on from being the workbench of the industry to being the R&D lab."

China's leading role can be seen most clearly in the scale of its expansion of the infrastructure needed for battery electric vehicles. Despite having an enormous road network within its borders, in the past 12 months, the country has managed to double the amount of capacity it offers – from 2.5 charging stations per 100 km of roadway to 5.7 (Germany 4.5, France 2.3, USA 0.3 stations per 100 km of roadway). This is money well spent, given that Chinese consumers believe in e-mobility more than many others: 65 percent of Chinese survey respondents can imagine buying an electric car as their next vehicle. As such, they are much more open to innovation than consumers in Western Europe, where the level of interest is stagnating at a mere 30 percent. 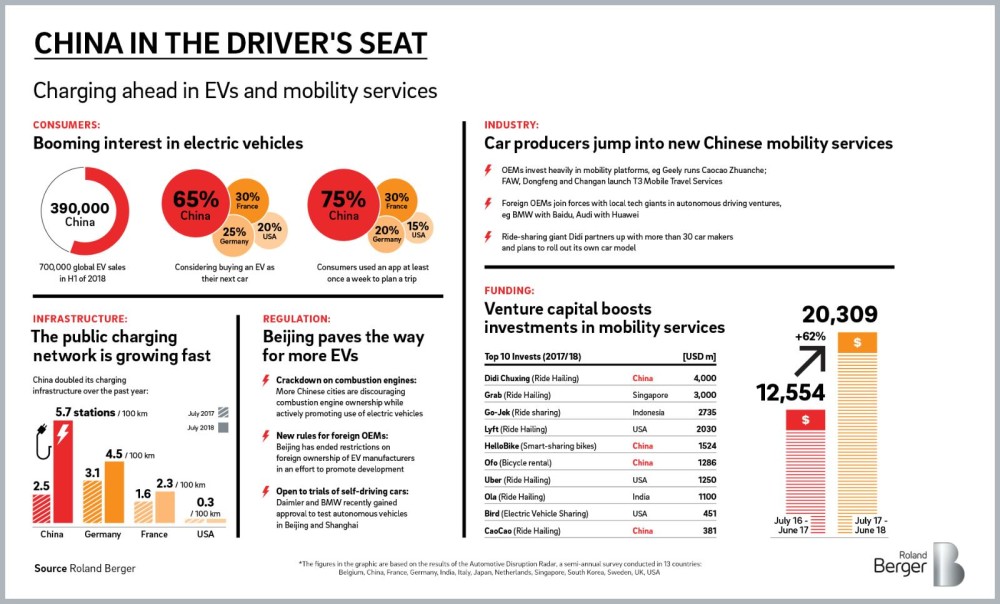 Innovative forms of mobility are the top of the political agenda in China. The country's standardized guidelines and fundamental openness to self-driving vehicles mean it is becoming a global test bed for self-driving cars and an important potential market for large foreign manufacturers: German OEMs recently gained permits to trial autonomous vehicles on the streets of Beijing and Shanghai. The government is simultaneously driving forward with vehicle-2-everything initiatives to connect vehicles not only to other vehicles but also to mobile devices and even electronic road signs. Beijing clearly wants to be a leader in the technology to compete with the key US tech providers.

But the momentum stems not only from political quarters. Chinese industry, too – OEMs and tech firms alike – have ramped up their activity in recent months, entering into new or expanding on existing cooperation agreements.

Although tech giants and OEMs are working hard on disruptive mobility concepts, the Roland Berger experts do not yet see anyone mobility brand dominating the global market: "Despite a very high level of awareness around issues like self-driving vehicles, connectivity and e-mobility among the international public at large, no one company has yet emerged as the global frontrunner," said Wolfgang Bernhart in summary.

The latest rankings are led by Uber (USA), albeit known by "just" 46 percent of those polled, followed by blablacar (France) at 20 percent and Daimler's car2go at 9 percent. "So there is still everything to play for in the race for supremacy in innovative mobility services," said Bernhart.

Roland Berger is the only strategy consultancy of European origin with a strong international presence. As an independent firm owned exclusively by our partners, we have 51 offices with a presence in all major markets. Our 2,700 employees are characterized by a unique combination of analytical thinking and an empathetic mindset. Driven by our values of entrepreneurial spirit, excellence, and empathy, we are convinced that business and society need a new, sustainable paradigm that focuses on the whole value-creation cycle. By working in interdisciplinary teams across all relevant sectors and business functions, Roland Berger offers the best expertise worldwide for successfully overcoming the profound challenges of our age now and in the future.