Munich/Aachen, July 2018: The world's seven leading automotive nations – Germany, France, Italy, the US, Japan, China and Korea – are pressing forward emphatically with their e-mobility efforts. Prices of important raw materials like lithium and cobalt are therefore rising, partly as a result of speculation, making it all the more important for automotive manufacturers to have a clear strategy in place for their battery value chain. Success in the e-mobility business calls for vertical cooperations between OEMs and raw material suppliers as well as sustainable solutions for recycling used batteries, according to the findings of the new E-mobility Index 2018 (Download study here) produced by Roland Berger and Forschungsgesellschaft Kraftfahrwesen Aachen (fka).

The E-mobility Index highlights where the seven countries stand in the overall rankings and how well they perform in each of the three indicators: the market, technology and industry. The United States shares top spot with China in the overall rankings this year, mainly as a result of now offering more battery electric vehicles (BEVs) in the mid-range price segment. "China has strengthened its lead in the industry indicator on the back of strong growth in vehicle and battery cell production and remains the global number 1 in e-mobility," explains Wolfgang Bernhart, Partner at Roland Berger. The share of plug-in hybrid electric vehicles (PHEVs) or BEVs in total new vehicle registrations in China reached 2 percent in 2017 for the first time. Electric vehicles accounted for a share of 1.5 percent in Germany.

French OEMs retain pole position in technology, not least through the rigorous expansion of their product portfolios with a focus on smaller, low-cost electric cars. Germany, on the other hand, languishes in fifth place in the industry rankings behind Japan and Korea, even though German manufacturers are building more and more electric cars. "German OEMs have struck deals with suppliers to secure most of their battery cell and battery module requirements for the upcoming years," said Bernhart. "But in doing so, they have made themselves dependent on a very small number of providers."

Cell and battery producers will see their market power grow even stronger in the coming years. Whereas just one million BEVs and PHEVs were on the world's roads in 2017, the number of newly registered electric cars is set to rise to more than 20 million worldwide by 2030.

For this to be realized, production capacity for battery cells for use in passenger and commercial vehicle applications will need to ramp up dramatically: from 70 Gigawatt hours (GWh) in 2017 to as much as 1,600 GWh in 2030. The Roland Berger and fka experts, therefore, predict that the global market volume for battery cells will reach around USD 19 billion by as soon as 2021. China will account for 29 percent of that, followed by Korea (21%) and Japan (17%).

Germany itself cannot claim any significant battery cell production yet. A Chinese battery manufacturer has announced that it will start production in Thuringia at the end of 2019, however, this will only further increase dependency: "OEMs really do need to react now and come up with suitable strategies, otherwise they will either not have the capacity to implement their electric car parcs as planned, or they will become dependent on battery producers," said Alexander Busse, a consultant with fka.

"What matters for both OEMs and battery producers is that they keep an eye on their value chains so as to avoid running into raw materials shortages and to be able to keep their costs competitive," added Wolfgang Bernhart.

On the basis of their findings, the Roland Berger and fka experts outline two possible strategic options OEMs can take to help them avoid becoming overly dependent on battery cell producers.

The first strategy, which involves establishing in-house battery cell production, makes the most sense for the big OEMs, those that are in a position to attain the necessary technical expertise and make the substantial and sustained investments required – in areas like research and development. OEMs should partner with players along the full extent of the value chain in order to mitigate their risk.

Alternatively, there is the option of building up a less monopolistic supplier structure to guard against supply shortages and counter the high level of price sensitivity along the battery cell value chain. The aim should be to bring in other suppliers besides the dominant cell producers and enable them to grow their business. This will ultimately lead to greater competition in the market. 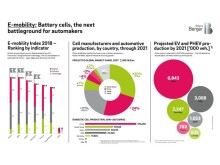