Munich, November 2018: What innovation could ease our congested transport networks and get passengers to their destination faster? The answer is electric passenger drones. Little more than a distant dream until recently, the market for such aircraft is starting to gain momentum thanks to technological innovations. While Dubai, Singapore, Los Angeles and Dallas have flagship pilot projects scheduled to go live in the early 2020s, other cities, including some in Germany, are set to follow suit. A recent Roland Berger study, Urban Air Mobility: The rise of a new mode of transportation (Download study here), found that some 75 companies around the world are working on the development of passenger drones.

"We anticipate that passenger drones will be a realistic means of transport for intra-urban and regional journeys within five to ten years," says Manfred Hader, Partner at Roland Berger. "Advances in battery technology and autonomous systems will give the industry significant momentum."

Although the global market for passenger drones is set to remain relatively small over the next few years, with Roland Berger experts predicting some 3,000 drones in the skies by 2025, the industry will see exponential growth in the years thereafter as both the acquisition and the operating costs of drones will be significantly lower than comparable costs for helicopters. 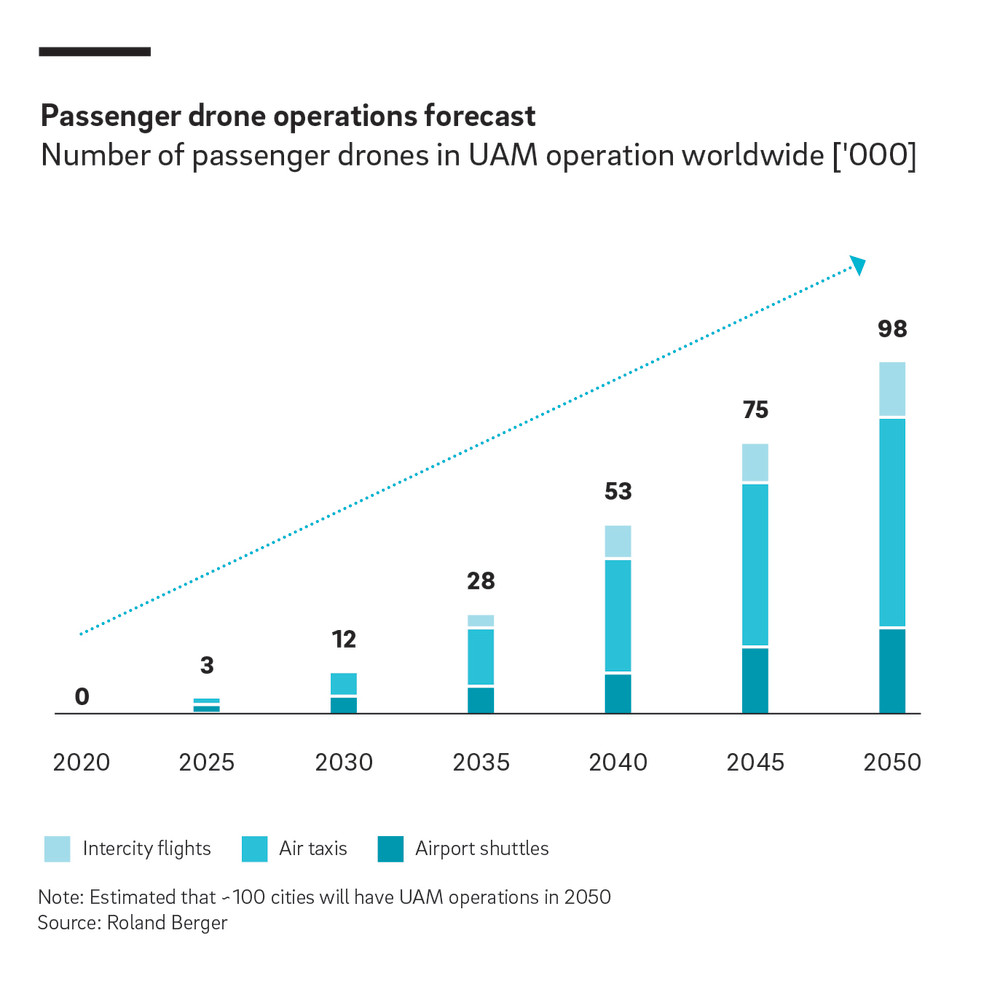 In the early years, the study authors expect the new generation of aircraft to be used primarily as airport shuttles and for transporting people within and between cities. "Passenger drones can reshape the urban mobility mix," explains Tobias Schoenberg, a Roland Berger Partner. "Given the right framework, they may be able to ease the congestion we see so often in our transportation networks."

What the first drone for urban transport will actually look like is still a matter of debate. Some of the most promising future architectures include multicopters and quadcopters, tilt-wing aircraft, vertical takeoff and landing (VTOL) craft as well as hybrid designs. While the copter constellations would be particularly suited for inner-city use cases where space is at a premium, the fast-moving VTOL craft would seem a good choice for transportation over greater distances.

A number of regulatory hurdles also remain to be cleared. "Passenger drones powered by electric propulsion need not only the right charging facilities and servicing capacities, they also need safe and approved places to land. Suitable locations are often hard to find, not only in densely populated cities but even in rural areas," says Manfred Hader.

Another imperative for the use of electric aircraft is a robust 5G cellular network to guarantee an aircraft's ability to communicate with control centers and other users of the near-surface airspace. The regulator, too, will be challenged because supervisory bodies, airspace categories and legal aspects relating to the new technology are all still to be defined at this point in time.

Cooperation will be key

Targeted partnerships will be particularly important for the success of passenger drones. Take the one in Ingolstadt, for example, where the Bavarian state is cooperating with 14 other authorities across Europe (including the cities of Geneva, Hamburg, Brussels, Antwerp and Toulouse) in the EU's Urban Air Mobility Initiative. Besides Germany's national government and the Free State of Bavaria, Ingolstadt has also managed to get the business community, neighboring airports and other players onboard for the project's launch. Together they will be working to define potential use cases and the necessary prerequisites for test flights to begin.

"If Europe succeeds in getting different players around the table and working together more closely, we can anticipate a real mobility revolution that can take the pressure off our congested city streets," predicts Tobias Schoenberg. 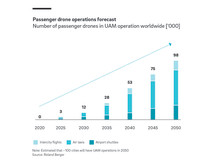